Earlier this month, I flew out to Düsseldorf, for the Beyond Tellerand: Play & Make conference. It was the second of two conferences that I attended this year, both of which were outside of the UK, and it was great to gain some new perspectives on the world of creativity in software and hardware, beyond my usual trip to Flash on the Beach/Reasons to be Creative in Brighton.

The Play & Make conference featured talks on a broad range of topics including UX/UI, application development, and then emerging technologies in areas like physical computing, including the use of computer vision and platforms like Arduino and Raspberry Pi. The Capitol theatre was a great venue with a really nice auditorium layout consisting of small lamp lit tables in the front seating area. Following, are some of the observations and notes that I made from the speakers over the course of my two days at the conference. 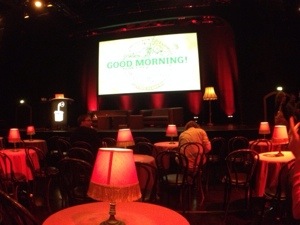 Carlos is someone I’ve seen speak a few times now and it is always apparent that the projects produced by HelloEnjoy, the interactive studio which he is a part of, are the sum total of some outstanding technical achievements. In this particular talk, Carlos spoke about HelloEnjoy’s latest project, ‘HelloRun‘, a game built using WebGL with the HTML5 stack. The game itself is simple enough, you move, in first person through a tunnel in which there are barriers which you have to dodge to avoid. The real technical achievements lie in the details, and examples of this can be seen in aspects such as the lighting of the scenery, and the way in which the audio API is used to make the lighting respond to the beat of the music. Carlos provided a really in depth look at some of the challenges that were overcome within the project.
One of the key factors that I found most impressive was the fact that it is also possible to play the game on mobile devices, provided that WebGL is present, leading ‘HelloRun’ to be a truly worthy example of a web app

I first saw Jared Ficklin speak at Reasons to be Creative in 2011, during which he demonstrated and spoke about some of his experimental work with sound, fire, smoke and the Kinect sensor. I also remember him talking about the interactive opening party for South by Southwest in 2010 which involved the development of some really interesting hardware implementations including projection mapped portaloos and networked RFID check in points.

Within his Play & Make talk, there were some really interesting considerations about the present state of interaction design and how we can expect this to develop in the near future. He spoke about some really interesting themes but my main take away was his emphasis on the need for more heads-up, collaborative computing experiences.

Jared emphasised that much of the technology we use on a day to day basis claims to enable us to be more social and connected, yet it requires us to be physically hunched over a relatively small screen. This is also often an experience suitable for individual users and effectively isolates us from the rest of the world. In the interest of making technology more inclusive and cooperative, rather than heads down – there is a need for research and development into technologies and computing interfaces which are integrated at a room level, keeping us ‘heads up’ and collaborative, rather than technology being condensed into the mobile device form factor which keeps our heads down and effectively shutting out the world around us. This makes a lot of sense to me and I think there is a lot to be said for how current technological trends will affect social behaviour in the long term. It’s also the reason that I question the worth of upcoming devices like the Oculus Rift, beyond gaming. 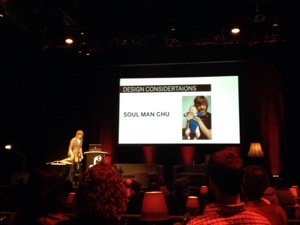 Other great speakers on day one included Florian Schmitt, whom I had seen at Resonate earlier in the year showing his work with both Hi-Res and Nanika, and Mario Klingemann, who, in the last few years has branched out into some really interesting avenues of development. I particularly enjoyed hearing about his work with FAT Lab Berlin – especially so, the working typography gears, I think this was a great little project and there could be more in this concept and the idea of creating mechanical story books of some sort. One of the really poignant ideas that came across in Mario’s talk, for me, was that stochasticity can often lead to more original ideas, rather than constantly referring to the usual sources, and things that have already been done. I also found James Patterson’s talk really enjoyable. In particular, he showed some of the work he had been developing in collaboration with another interaction designer, Amit Pitura (http://www.pitaru.com) which I found really impressive. Two really outstanding examples included: http://www.rhondaforever.com and http://sws.cc/sws2003.html. He also taught us how to fold the ‘Boolean’ paper plane design, because analogue is still fun too. 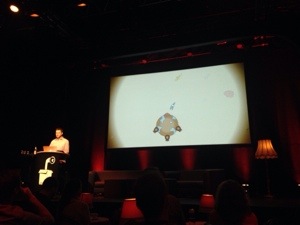 Day two began with a demonstration of the new Microsoft Kinect V2 sensor by Gunter Logemann. He demonstrated some of the new key features including the vastly improved tracking resolution, thanks to an HD camera, which now makes it possible to track up to 6 people, each with 25 points of joint information. Improvements have also been made possible through the addition of an active IR sensor which allows visible light sources in the room to be filtered out, thus reducing interference from lamps and other lights being used in a room. Of the features that we were shown, the new Kinect appears to be a huge improvement on the last, offering far more robust tracking.

It also appears that Microsoft have taken a lot of user feedback on board and are attempting to implement a more natural user interface. Where the initial Kinect relied a lot on the use of devices like time activated switches, the new Natural User Interface, or NUI, uses more familiar gestures like taps and hovers and is capable of recognising hands as hands, as opposed to points, hopefully allowing for more natural gestures to be used. From Gunter’s talk, it certainly seems apparent that, following the initial release of the Kinect, Microsoft are working hard to develop the Kinect as an input device.

Eva-Lotta Lamm’s talk took the form of a sketch workshop which I really enjoyed. Lately, I’ve been trying to get more into drawing and sketching, where appropriate, as it’s often a far more effective way of putting a point across and I think that lends itself far better to both the conveyance of a message as well as during the process of generating ideas.
The very act of taking notes during the process of brain storming, for example, often causes us to short hand or abstract the essential meaning from an idea, in order that we can get that point down quickly and move on to the next point. This process may detract from the idea itself, and if we must go through the process of making marks on paper, in order to create recognisable symbols for future recall, why not sketch a scenario, instead of describing it?
As part of the session, we had a quick introductory lesson which covered the basics of sketching which I can see being useful in the process of getting ideas on to paper when prototyping new concepts. Eva highlighted a website that she and a few collaborators have developed, which provides inspiration for practice doodles: http://evalotta.pancakeapps.com
I’ve seen Eva featured in the bill for a few previous conferences and whilst I have seen some of her work, regrettably, I haven’t had the chance to see her speak so this was a great opportunity and I enjoyed the talk a lot.

I’ve been following Niklas Roy’s work ever since I saw his “My little piece of privacy” project. In this piece, he has combined motion tracking with a motorised net curtain in an attempt to prevent people peering into his workshop from outside. He’s a developed a really humorous solution to the problem which provokes playful reactions. I also really like the way that the reaction times of the curtain movement aren’t quite quick enough to track passers by, and that sometimes anomalous results in the tracking cause the curtain to twitch and stutter. We often expect more than we should from technology and the random utterances made by the Curtain Control device, almost give it personality.

Niklas Roy’s other projects, many of which stem from the field of physical computing, explore interactions and ways in which mechanics and computing can be combined to provide interesting, and often very creative, solutions to problems.

I really enjoyed Niklas’s hearing about projects – they all seems to execute an idea in a really playful and creative way. I like the characteristics and charm that his machines and projects often have, it makes them less machine like a bit more human.

Beyond Tellerand: Play & Make was a really enjoyable conference with some really great speakers, I wrote tons of notes and genuinely found it really hard to distill everything that inspired me into a single blog post so I’ve hopefully capture the key highlights for me personally. I really hope that this sort of event runs as part of the Beyond Tellerand series again as I think it’s more broad and indicative of some of the paths that interaction developers are taking, in particular, but not limited to, those who are developing their skills, post Flash.